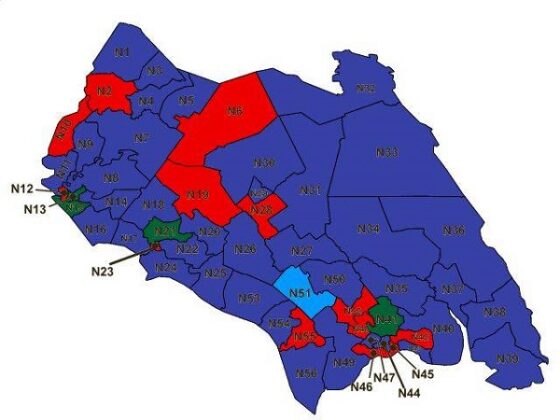 LABIS, Jan 30 — Polling for the Tenang by-election opens at 8 this morning with the size of Azahar Ibrahim’s majority over PAS’s Normala Sudirman being the only surprise in the Barisan Nasional (BN) stronghold state of Johor.

PAS and their Pakatan Rakyat (PR) colleagues have faced an uphill battle in the country’s 14th by-election since Election 2008 but they hope to cut BN’s majority as an inspiration of possible snap polls later this year.

Deputy Prime Minister Tan Sri Muhyiddin Yassin has set a 5,000 majority target but DAP’s Lim Kit Siang said PR would score a moral victory if they could limit BN to below the 2,492 majority received in the 2008 general elections.

PR is hoping for more than 55 per cent of the vote from the Chinese, who form 39 per cent of the electorate while BN has campaigned to keep a majority of the Malay votes, especially the 3,800 from the three Felda schemes in the state seat.

A total of 14,753 voters are registered to cast their ballots at the 12 voting districts throughout the Johor state constituency. The seat has 18 postal voters. The Election Commission (EC) said 65.19 per cent of voters, or 9,618, had cast their ballots by 3pm.

Azahar, the former Rengit Assistant District Officer picked over a slate of local Umno officials, is registered to vote at the Sekolah Kebangsaan Seri Labis.

Normala is not a Tenang voter, but she is scheduled to spend the entire day visiting all 12 polling stations until the end of the voting period.

While the ruling coalition has set a target of 5,000 votes margin of victory, according to a survey by Ilham Centre, BN would only retain the seat with a majority of about 3,000 votes.

USM’s Professor Sivamurugan Pandian expected BN to retain the seat with an increased majority due to the failure of the PR campaign to bring up issues closer to the local electorates.

“Perhaps the opposition wants to start preparing for the general election here, by showing that these are the issues that need to be considered by the locals,” Sivamurugan told The Malaysian Insider.

“For BN, it is tied to the survival of the PM’s leadership and BN’s contribution in the context of maintaining prosperity, like in Felda’s case.”

Sivamurugan said the Tenang vote would also determine whether Islam would be a major issue in the next general election.

BN’s campaign through its second-largest party MCA, has been harping on PAS’s agenda on the Islamic state, and Normala’s refusal to shake hands with men.

“I expect BN to win with a majority bigger than what it obtained in 2008,” said Sivamurugan.

Polling ends at 5pm and the outcome is expected to be announced around 8pm.

The Election Commission had said that it expected voter turnout to exceed 80 per cent — higher than Election 2008 when 73 per cent of the voters cast their ballots.

However, the reported weather forecast of rain and the possibility of floods could stop many from turning up to vote.