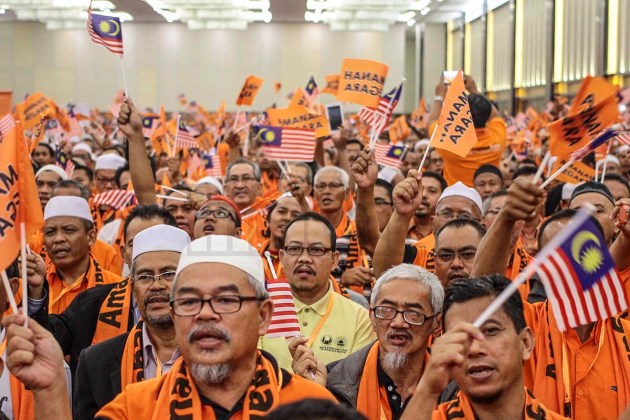 Amanah leaders said they would also consider Malacca and Negri Sembilan, based on their own research on voter receptiveness towards the splinter group from the Islamist PAS, comprising of its progressive leaders.

“We will contest in whichever seats based on our detailed analysis. There is no point contesting many seats but losing them,” said Amanah deputy president Salahuddin Ayub.

“It is better that we contest in fewer seats but win them so that we can add value to Pakatan Harapan,” Salahuddin told The Malaysian Insider, referring to the new opposition pact unveiled on September 22.

Based on its analysis, Amanah is poised to do best in Selangor, which has a good mix of non-Muslims and urbanised Muslims.

“After Selangor, Johor, Malacca and Negri Sembilan will be our focus,” said Salahuddin, who is from Johor and who contested in the state under the PAS banner in the 13th general election in May 2013.

Amanah’s analysis is also shared by Universiti Malaya history expert Prof Datuk Dr Redzuan Othman, who said Selangor was their best bet as a forward base.

Think-tank Ilham Centre also said its research showed that voters in Selangor and Johor were positive towards the new party.

Amanah also has a good chance in Selangor, based on the demographics in each seat, including among the Malays.

“When Amanah is in Pakatan Harapan, Selangor Malays will support them,” said Hisomudin, adding that being in a coalition with DAP and PKR would help Amanah win non-Muslim votes.

“I believe this is among the factors why PAS has decided to remain in the Selangor government together with DAP, as PAS cannot operate as an opposition party for the next two years before the elections,” said Hisomudin.

PAS, through its three exco members, is still in the Selangor government despite breaking off ties with the DAP in July.

With its focus on southern states in the peninsula, Amanah appears to be avoiding the north and northeastern states where PAS is more established.

These are the Malay-dominated states of Kelantan, Terengganu, Kedah and Perlis.

Amanah Kelantan chief Datuk Wan Abdul Rahim Wan Abdullah has said the party would most likely not contest in Kelantan state seats to prevent multi-candidate fights between PAS and its traditional rival Umno.

This is to give PAS the best chance of retaining the Kelantan government which it has held for 35 years.

However, he did not rule out fielding candidates for parliamentary seats.

This stand is being taken despite the fact Ilham Centre’s own surveys showed that Amanah registered the highest number new members among all states in Kelantan since its launch on September 16.

In Terengganu, the state’s Amanah Youth chief Hasbie Muda said the wing would order all its members to vote for PAS candidates given the latter’s strength in the state.

“Amanah Youth will be realistic and honest with itself. There is no point in contesting and losing your deposit or just because you want to muddy the waters,” Hasbie said. – October 7, 2015.